In cooperation with Wojud Foundation, Abductees’ Mothers Association held, this morning, a hearing session for the victims of forced disappearance and arbitrary arrest in Aden. 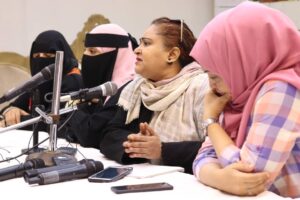 Eshraq Al-Maqtari, an activist and a member of the National Committee, participated in the event and considered, in her speech, forced disappearance the second gravest violation against humanity, after targeting and killing civilians.
The wife of Adel Al-Haddad, a victim of forced disappearance, said that her husband has been forcibly disappeared since November 17th, 2016. He was abducted by Aden’s Security Belt on that day and she had not had any news of his fate till this day, despite her legal appeals. She talked about the difficulties she had been facing in life since her husband’s abduction, and about the suffering of all mothers who were devastated by false promises, which led, occasionally, to a mother’s death, like the case of Helmi Al-Zenji’s mother. She condemned the assaults they were subjected to during their peaceful protest, and demanded bringing the perpetrators of forced disappearance to justice, and stopping charging abductees while they are still disappeared. She confirmed that she had been financially extorted and requested to declare the death of her husband in order to receive his monthly salary. 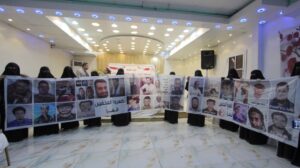 Emad Tareq Abdullah was abducted and forcibly disappeared on June 6th, 2015 after a bus he was on was hit by an air strike. His mother said she went looking for him among dead bodies, but Houthis told her that he was alive and had been hospitalized. At the hospital, however, a doctor told her that he had been taken for interrogation for two days. Despite her legal pleas, she had not heard any news from him since June 8th, 2015. 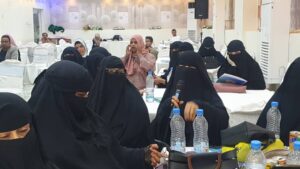 Adel Al-Baydani’s wife said that her husband went to Sana’a to look for a job and was abducted and forcibly disappeared on April 24th, 2016 while she was pregnant. She had to face cruel financial difficulties on her own. After 8 months, she received the news of detaining her husband at Political Security Prison in Sana’a. She waited at the prison gate from 8 a.m. until 11 a.m. in order to be allowed to see her husband. Yet, she was shocked to see shackles on both his wrists and ankles. Since then, she had pleading everywhere for her husband’s release despite the repeated extortion she had had to face. 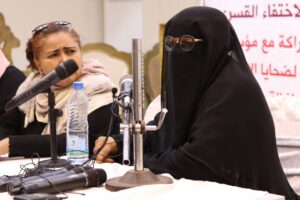 Families of forcibly disappeared and arbitrarily arrested persons said that they would stand their grounds by continuing their peaceful rallies and pleas until all their relatives are free and their voices are heard by international competent authorities as their determination had previously led to uncovering the fate of many forcibly disappeared individuals who were either released or transferring to Be’er Ahmed Prison.