Abductees’ Mothers Association condemned issuing execution and imprisonment judgements of 13 abductees held at Political Security Prison in Sana’a. Those abductees had faced false charges, had confessions forced out them under torture, been repeatedly forcibly disappeared, and referred to kangaroo courts. 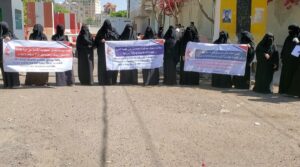 The latter was released on August 27th, 2020, after the intervention of a local mediator.  Ahmed Abdullah Al-Qata’a, whose father passed away last Tuesday while waiting for his son’s freedom, Fu’ad No’man Al-Awadhi, Nabil Mohammed Al-Sedawi, and Assem Thabet Radman were all sentenced to eight years in prison, starting from their arrest. Furthermore, Mansour Mansour Al-Faqih, Esam Mohammed Al-Zendani, Mohammed Abdu Al-Harazi, Mukhtar Abdullah Al-Jabali, and Mahdani Ali Al-Mahdani were sentenced to seven years in prison starting from the day of their arrest. Habib Yehya Al-Udaini was ordered to be released after five years of detention. Yet, he had not been released until this day. All those abductees were included in the lists Stockholm Agreement’s negotiations regarding abductees and war prisoners.

The mothers’ statement, which was released during their rally, declared that the arrest and search producers were unlawful and that the trials were held as long as five years of abductees’ detention.

The statement explained that abductees’ mothers, wives and children were devastated by the unexpected judgements, which were issued amidst the cries of women and children, who were waiting for release orders after years of imprisonment.

Nobody could answer Amjad, Fahd Al-Salami’s little son, who was wondering “How will my father’s execution be!” In their statement, mothers added that in the past two years, Abductees’ Mothers Association had documented the judgements of executing 36 abductees, including 4 journalists, and one, Abdulmajid Alous, passed away due torture and medical negligence.

Moreover, 9 abductees from Tehama Region had been executed in an action that can be considered a war crime while the association had, also, documented the execution judgements of two women in Sana’a.

Mother carried banners that held Houthi armed group completely responsible for the issued judgements, and warned of the consequences of such judgements, affirming that such crimes are imprescriptible.

The statement was concluded by demanding to stop all political trials carried out in relation to the war, and drop all judgements issued by them.