In its rally by the office of United Nations Secretary-General’s Special Envoy for Yemen in Sana’a, Abductees’ Mothers Association condemned excluding the case of abductees and arbitrarily arrested and forcibly disappeared persons as the regional efforts, as well as of the United Nations’, continue to progress in order to end the war and build peace in our country which leads to prolonging and increasing the suffering of their sons and their families.

Mothers held all Yemeni parties and abducting authorities responsible for the lives and safety of all abductees, and demanded the unconditional release of all abducted, arbitrarily detained, and forcibly disappeared civilians, especially the women. 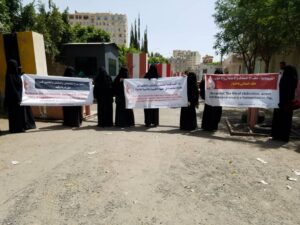 The rally statement referred to the capability of all parties of implementing a full scale release of all abductees, after releasing hundreds of abductees on October 15th and 16th, 2020, as an implementation of an agreement signed under the auspices of the United Nations. Yet, there were 624 abducted civilians, including four women, held by Houthi armed group, as well as 25 ones held by the government, as documented by Abductees’ Mothers Association. 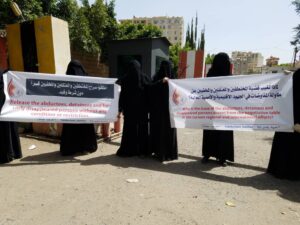 In their statement, mothers expressed their gratitude for international and regional mediators for their great efforts, and urged them to place the case of abduction, arbitrary arrest, and forced disappearance as a priority at the negotiations’ agenda, and mount the necessary pressure on all parties to completely implement the case-related agreements. The declared that the issue was a humanitarian case that extended the suffering of hundreds of abductees to thousands of their mothers, children, and relatives, thus could not be derailed or excluded from negotiations. 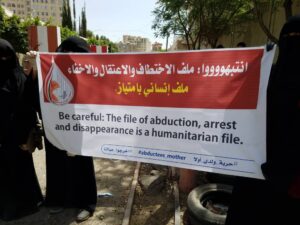