Abductees Mothers Association demanded the international and regional community to mount the necessary pressure on all parties to immediately release all abductees and forcibly disappeared and arbitrarily arrested persons, and completely implement all conventions agreements to save them. 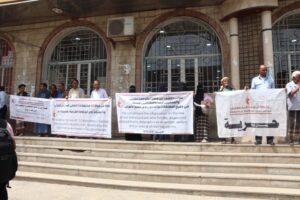 In their rally this morning in Taiz, mothers said that Houthi armed group still detained 123 civilians and forced 31 others into disappearance. The group completely refused to include these civilians in the negotiation lists for prisoners’ swap, despite local and international mediations. On the other hand, the government held five forcibly disappeared civilians who had been arrested by security forces. 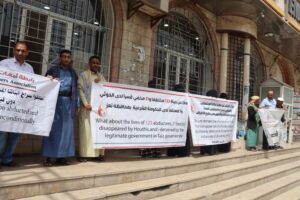 In the rally statement, mothers condemned the failure the case of abductees and forcibly disappeared and arbitrarily detained persons was facing, despite all the peace efforts made lately. The case was excluded from all humanitarian issues although initial success had been made since signing its own agreement. 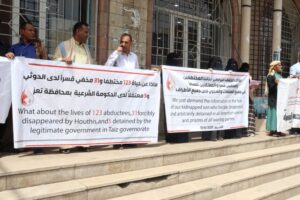 The statement highlighted that years had passed by while abductees were still detained. Their suffering had doubled and their case gone cold. Thus, civilian freedom had become a political game.