With mothers’ hearts that had been repeatedly broken by fear, longing, and postponed promises, Abductees’ Mothers Association demanded the UN’s Special Envoy for Yemen, Mr. Hans Grundberg, to include releasing abductees and detainees in his efforts to lift the blockade of Taiz. 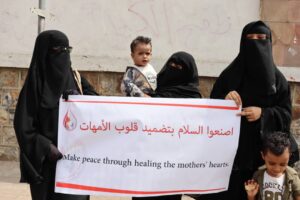 In its protesting rally held this morning by the governorate administrative center, the association stated that its team in Taiz had documented the abduction of 401 civilians, who were arrested at Houthi armed group’s checkpoints. 39 of those abductees are still held prisoners in horrible detention conditions. 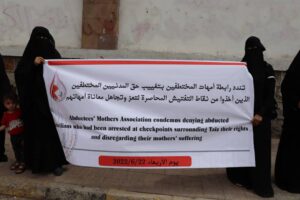 The rally statement condemned restriction of movement and abducting civilians at checkpoints, and demanded the immediate release of abductees. it reiterated that their freedom was a part of the solution as they had been abducted at the same checkpoints used to impose the blockade of Taiz, and release was vital for the desired peace and lifting the blockade.

In conjunction with the extension of truce, which states lifting the blockade of Taiz, the rally statement condemned denying abducted civilians, who had been arrested by the checkpoints surrounding Taiz, any access to their rights, and ignoring the suffering of their mothers who face death and agony on their way to visit. Added to that was the suffering of forcibly disappeared civilians’ mothers, whose last contact with their sons was when they were stopped at checkpoints.