With the approach of the International Day of the Victims of Enforced Disappearance, Abductees’ Mothers Association in Taiz demanded uncovering the fate of 32 forcibly disappeared individuals, 2 of whom are held by Abu Alabas group, one held by the Joint Forces at the western coast, and 29 are held by Houthi armed group. Some of the victims had been forcibly disappeared for as long as 6 years, with no news of their medical conditions and safety. 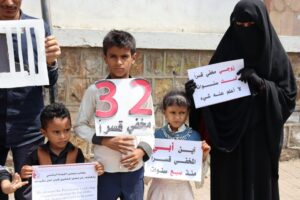 During their rally this morning, mothers condemned and excluding the forcibly disappeared persons from any international and local mediations to release abductees, and prolonging their disappearance.

In their rally, mothers stated that Ahmed Haddash’s family held a condolence gathering, expecting that he had passed away, after looking for him in many prisons and being told he was not held at any of them. 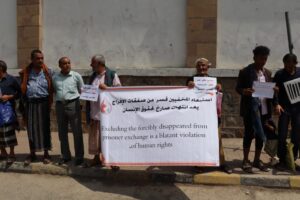 Eventually, the family found out, after many years, that he was still alive when he called them on the day of his release.

Mohammed Al-Besbas’ mother said “I looked for my son for a long time after he was abducted. I sold everything I had in order to know where he was held. Yet, they only returned his dead body after he was killed in the bombing of Dhamar’s Community College Prison.” 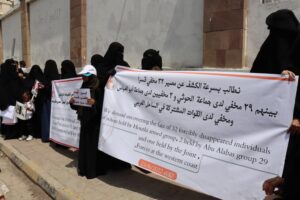 The rally statement held all abducting parties fully accountable for the lives and safety of abductees, mainly the forcibly disappeared ones. 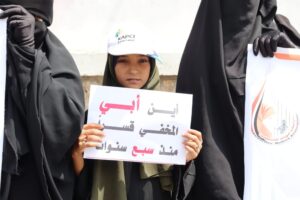 The statement was concluded by reiterating that the issue of abductees, and forcibly disappeared, and arbitrarily detained persons is purely humanitarian, and must not be used in political conflicts.