Titled Torture Crimes Are Imprescriptible, Abductees’ Mothers Association held, this morning, its fourth conference for the torture victims who had been abducted and detained by Houthi armed group. The conference started by welcoming and congratulating the abductees for their freedom after many years of detention, incarceration, torture, and suffering and assuring that the association will continue its efforts until all abductees and forcibly hidden individuals are released. 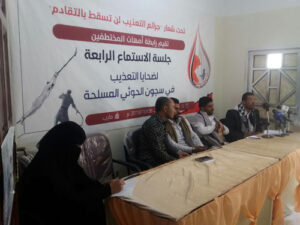 During the conference, former abductees told the stories of their detention and torture at Houthi prisons. Maher Heba, who had been detained for 4 years, told the story of his abduction where he had been tortured and forcibly hidden for four months and 17 days then transferred to Political Security Prison where he spent four years there.

Fua’ad Al-Kabodi said that he was abducted from his shop around 10 pm. He was accused of multiple false charges which resulted in four years of incarceration and torture. He was finally released last week in a prison exchange deal.

Sadam Al-Kabesi was taken from his house with no accusations or charges. He was, shortly, detained at Al-Jedairi Prison then transferred to Habrah Prison where he spent four years and was repeatedly subjected to torture.

Yusuf Al-Ghawli said that he had been arrested at his house and detained for 3 years where he was transferred back and forth between Habrah Prison and Political Security Prison. He was repeatedly subjected to torture, interrogation, and false accusations. 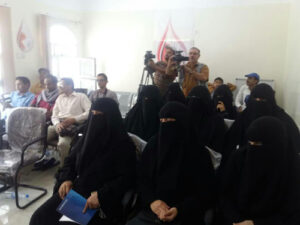 Abductees’ Mothers Association had held three conference earlier as a part of its agenda to support human rights and raise awareness of the suffering abductees go through in prisons.