In Taiz, Abductees’ Mothers Association held its first society meeting, which was attended by different representatives of political parties, civilian components and local authorities. The meeting mainly discussed the role of the community in facing the violations of all abductions and arbitrary arrests.

At the beginning, Asma’a Al-Rae’i, the association’s representative in Taiz, spoke of the efforts made by official and unofficial bodies to support the case of abductees, expressing Abductees’ Mothers Association’s belief in the capability of the society and its leaders to provide the needed support to the case of abductees and forcibly disappeared, and raising the society’s awareness which cracks down on all abductions, no matter their backgrounds are and perpetrated by individuals, groups, militias, gangs or the authorities.

The meeting’s agenda were mainly based on;
Creating awareness within the society, including all its classes, of the abduction and how to fight it.
The tactics of supporting abduction victims during the current situation.
Investing the society’s efforts, officially and unofficially, and using it as an ally for the sake of abduction victims.
In an intensive discussion, regarding the mentioned agenda, Yaser Al-Mulaiki, a legal researcher, talked about the necessity of spreading the legal awareness and forming a formal committee to oversee the case of abductees and provide the medical and psychological support for them.

Ali Al-Serari, a lawyer, affirmed that all bodies, including the government, NGOs, UN agencies and international community must form a plan to save abductees and end abductions while taking into consideration rehabilitating the released abductees. He, also, suggested various tactics for the support during the current situation.
Salwa Al-Qadasi, a Social Party representative, spoke of the importance of including the society in the abductees’ case as it, the society, is supposed targeted by the case. She also discussed the need for the help of lawyers, NGOs and political parties, which must have a great role at supporting the case.
Najah Hamid, a Nasserist Party representative, urged the parties to form a political component in order to acquire fruitful results in the case, as the awareness alone, with no security, would not protect civilians from abduction. 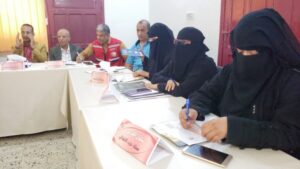 Sara Qasem Haitham, a Yemeni Congregation for Reform Party representative, said that the crimes against abductees are imprescriptible. She stated that all parties must commit to their roles in the abductees’ case and the awareness regarding it.
Colonel Samir Saleh Al-Ashbat, Deputy Chief of Police in the governorate, said that the weakness of the authority during the time of conflict appoints NGOs to be the sole choice to deter violations against civilians.
General Abdu Qasem Al-Buhairi, Head of Military Intelligence in Taiz, affirmed that the arrests inside the city are all based on the law and its procedures, and highlighted the importance of the sense of responsibility by all society members.
Mamdouh Al-Hemiyari, Preacher of Al-Eysa’i mosque, described the religious awareness in the Yemeni society as critical, especially with the worsening of morals during war. He explained that Houthi armed group carries out abductions in their areas, leading to mimicking such actions by evil-hearted people in the city.
As a result, the scale of abductions expands, the victims vary; from judges to public clerks, the perpetrating bodies increase. Therefore, the society must resist such violations by raising the awareness, in the contexts of religion and activism. 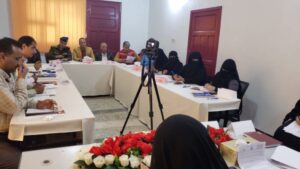 Nashwan Al-Husami, Manager of Al-Jumhoori Hospital in Taiz, participated in the discussion by providing his professional opinion, defining abduction as restraining of all liberties, and the victims of such violation need psychological support. Thus, the government must provide a fully-equipped mental facility to treat the released abductees.
In a similar context, Mokhtar Ameen Qasem, Executive Manager of the Red Crescent, said that the society lacks the awareness the needed regarding such issues, and that all parties, especially the local authority, have failed the abductees. He stressed on the need to reactivate the case of abductees by contacting the competent authorities.
Released abductees, Tawfik Al-Saba’I, Badr Al-Mulaiki and Abdulghani Al-Haij, stated that they dreamt of being released and helped by the government. Yet, their dreams could not come true as the local authorities and NGOs paid no attention to abductees’ needs. They highlighted the importance of the collaboration among all society members to express the suffering of abductees, current and former ones, support their families, and raise the awareness of their case.
Released abductee, Mushtaq Al-Faqih, recommended making a petition signed by political parties, lawyers and preachers, to support the case of abductees and the needs of released ones, using all means possible.
The meeting was concluded by introducing several recommendations such as; including the whole society, especially the local authorities and political parties, in supporting the case of abductees, and taking serious actions to release abductees and forcibly disappeared persons.
The recommendations, also, expressed the importance of generating more efforts by NGOs to mount pressure upon local authorities to fulfill their duties towards the case, establish psychological support centers for released abductees, and focus on raising their and their families’ legal awareness in order to make their voices heard by the local and international communities.