In this morning rally by the International Red Cross office in Aden, Abductees’ Mothers Association called upon the IRC to immediately take actions to save the abductees held at Be’er Ahmed Prison. 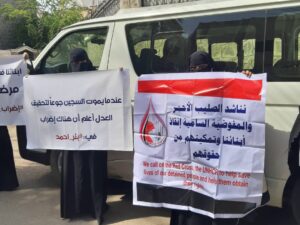 In its statement, the association confirmed that 57 abductees at Be’er Ahmed Prison are at the risk of catching contagious diseases as systematic healthcare negilegance continues.

Mothers said that abductees held at Be’er Ahmed Prison had continued their hunger strike for two days after the widespread of diseases as 7 abductees had been infected by Dengue Fever while prison administration ignored providing the vital healthcare to stop this widespread. 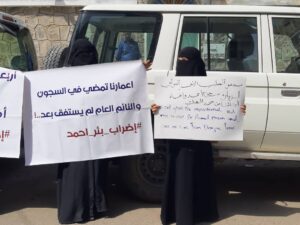 Mothers expressed their appreciation for the promises the IRC gave to visit the abductees, examin their health, and provide the needed healthcare services as an answer to mothers’ demands. Mothers explained that prolonging the follow up of abductees case by general attorney had led to the horrible current situation at the prison. 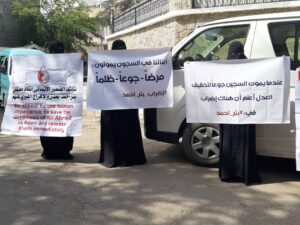 At Juridical Complex, mothers had a meeting with deputy of General Inspector at Courts Sector, judge Mohammed Mahdy, who asked to file a report in order to take the legal actions for the 18 abductees who are still awaiting trails, and promised to personally supervise the process.