Abductees’ Mothers Association demanded Aden’s governor, Ahmed Hamed, to urge the competent authorities to take the necessary actions immediately to uncover the fate and conditions of the forcibly disappeared persons. 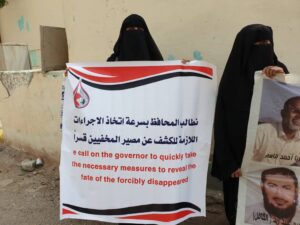 In their rally, this morning, mothers highlighted their demands of going forward with the legal processes, which had been stopped by the prosecution and the court, of the arbitrarily arrested individuals held at Be’er Ahmed Prison, and protecting their rights.

The rally statement explained that, for four years, 37 abductees had been forcibly disappeared. Their families lived in constant pain and grief, having no clue of their conditions and whereabouts. 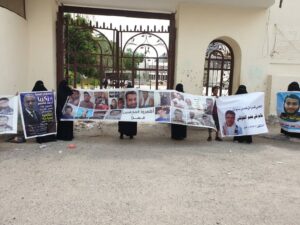 Moreover, 40 detainees were imprisoned while their cases and hearings had been unlawfully repeatedly prolonged and postponed for more than two years.

The statement held the authorities responsible for the lives and safety of abductees and forcibly disappeared persons, and emphasized on continuing mothers’ rallies until the fate of all their forcibly disappeared sons is uncovered, and all arbitrarily arrested detainees are released.