In its rally this morning by the Local Council office in Aden, Abductees’ Mothers Association demanded the government, namely the Ministry of Human Rights, to mount the needed pressure to uncover the fate the forcibly disappeared persons and continue the legal process of the arbitrarily arrested ones in order to release them. 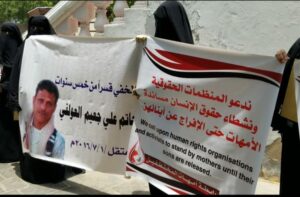 During its meeting with the Minister of Human Rights, the minister assured that he would continue to take the necessary actions with the competent authorities in order to unveil the conditions and whereabouts of the forcibly disappeared persons and speed up the legal processes of detainees.

At their rally, mothers expressed their utmost fears for their forcibly disappeared and arbitrarily detained sons, especially during these times of diseases and pandemic outbreaks.

“For many years, 45 individuals have been forcibly disappeared by Security Belt Forces, which is controlled by the Southern Transitional Council in Aden. Families have no clue of their relatives’ living conditions as they are completely prevented from any visits.” the association stated in the rally.

During the rally by the Local Council office in Aden, the association reiterated its demands to the government, mainly Ministry of Human Rights, to take the necessary serious actions and mount the needed pressure to uncover the fate and conditions of the forcibly disappeared persons, and grant them all their rights.

It, also, stressed on the need for the support of human rights organizations, locally and internationally, for the families of forcibly disappeared and arbitrarily detained persons in order to uncover their fate and release them.