Coinciding with the International Day of the Disappeared, Abductees’ Mothers Association in Aden carried out a peaceful protest, this morning, from Aloroudh Square to the governorate’s security administration building, demanding releasing and saving the lives of dozens of forcibly disappeared persons.

The protest statement elaborated that forced disappearance is a criminalized by the law and human rights. Yet, 38 individuals from Aden had been forcibly disappeared for 5 years. 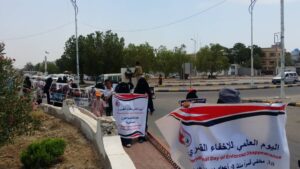 They were unlawfully abducted and no one had a clue of their fate. It explained that families had been prohibited from visiting and checking on their relatives. The mother of Helmi and Hussien, two forcibly disappeared brothers, kept looking for her sons everywhere, despite being seriously ill. However, she died before seeing her sons.

The statement held Southern Transitional Council responsible for the lives and safety of all forcibly disappeared persons, and demanded to immediately uncover their fate and release them. It called upon all human rights organizations, locally and internationally, to take serious actions to support the case of forcibly disappeared and arbitrarily detained persons until they are all released. 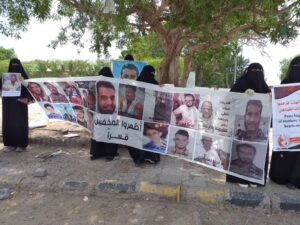 The sister of Hatem Al-Awlaqi, a forcibly disappeared individual, said that her brother was abducted in front of Almansoura post office on July 1st, 2016. Her family does not know anything of his fate and whereabouts until this day. Her mother has been sick and her brother was the only breadwinner in the family. She demanded all authorities to release her brother and all other victims of the unlawful forced disappearance.

The mother of Emad Sanhab, another forcibly disappeared individual, said that her son has been forcibly disappeared since June 17th, 2016. He was beaten up and taken in Altwahi district and people who tried to intervene were held at gun point. He fainted and was abducted. Shalal Sha’e, head of the governorate’s security administration then, told her that her son would return in two months. 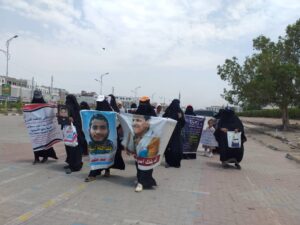 Yet, until this day, she has no clue where her son is and how his medical condition is, as he had been suffering from mental disorder.
Mothers held up banners demanding to uncover their sons’ fate and bring the perpetrators to justice.

The held Aden’s security administration and Southern Transitional Council responsible for the disappearance of their sons.