As the International Day of the Disappeared draws closer, Abductees’ Mothers Association participated in an event organized to publish and present Sana’a’s Human Rights office’s report, titled Unknown Fate, this morning in Ma’rib. The report monitored the violations of forced disappearance and torture at Houthi armed group’s prisons in Sana’a.

During the event, the association gave a speech on how its members have strived for freedom and justice and their search in official and unofficial prisons and authorities, but to no avail. 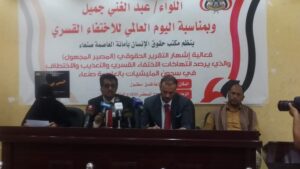 The association’s representative, Sabah Swaid, said that despite the lawful demands and peaceful rallies held by official authorities and UN agencies, the rallies had been repeatedly assaulted, attacked, and harassed. She also stated that forcibly disappeared persons mostly spend their forced disappearance periods at secret detention centres such as; houses,
educational facilities, and mosques, all of which had been taken over and turned to detention centres by Houthi armed group. Houthis, usually, carry out brutal physical and psychological torture sessions. Many abductees have died due to torture, as documented by the association.
According to Swaid, during 2019, there were 14 forcibly disappeared men and 6 women, as well as 2 cases of torturing to death, 106 cases of mistreatment, and 55 cases of medical care deprivation, in the capital municipality. In Sana’a governorate, there were 101 forcibly disappeared men, 30 cases of torture, 60 cases of mistreatment, and 2 cases of medical care deprivation in 2019.

Swaid concluded her speech by demanding the legitimate government to fulfill their duties towards the victims, to defend their rights in all summits and events in order to release them, to look after their families, and to provide the necessary support and help for the released ones until they recover from their loss. She also demanded the public prosecution to prosecute the perpetrators of such crimes and have them punished in order to create a deterrence that helps ending the crime of forced disappearance which Houthi armed group have been practicing until this day, and stopping the suffering of the victims who have been forcibly disappeared for as long as many years