In Taiz, Abductees’ Mothers Association condemned prolonging and derailing the case of their abducted, forcibly disappeared, and arbitrarily arrested sons, whose detention periods had lasted as long as six years, amidst the intransigence of all parties, and demanded their immediate and unconditional release. 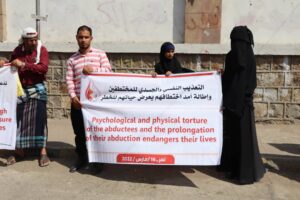 In its rally, held this morning by the governor’s office, the association stated that it had documented 76 cases of abducted civilians and 29 forcibly disappeared persons held by Houthi armed group. 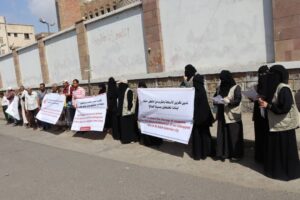 Additionally, there had been 2 arbitrarily detained persons held by the government, 2 forcibly disappeared individuals held by Abu Al-Abbas group, and one forcibly disappeared held by Tariq’s forces at the western coast.  The association, through its rally statement, condemned the great explosion that occurred on March 1st of this year in one of the buildings of Alsaleh compound, which is used as prisons by Houthis. 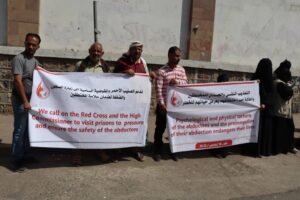 The explosion itself was expected to be caused by weaponries stored in the buildings by Houthi armed group, as a former abductee had testified that he witnessed weapon stored near detention buildings.

The rally statement called upon all human rights organizations and activists, locally and internationally, to exert the necessary pressure to release the abductees and forcibly disappeared persons, document the violations against them, and generate more efforts to fight impunity. 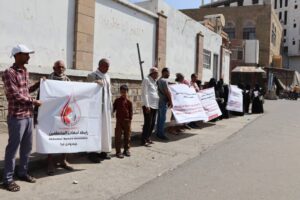 It demanded the ICRC and OHCHR to visit prisons and detention centres, take serious actions to grant the abductees and detainees access to all their rights, and mount the needed pressure to guarantee their safety.