Abductees’ Mothers Association demanded an immediate formation of an international investigation committee to investigate the crime of murdering dozens of abductees at Community College prison in Dhamar and to hold the culprits accountable for the crime. The association’s statement was announced today in Taiz at a protesting rally held by the association this morning nearby the district administration office. 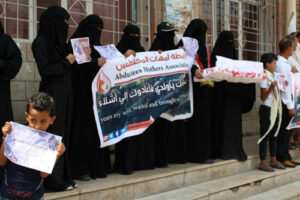 The statement condemned the one-week international silence towards such an inhumane crime where the coalition air force targeted Community College prison in Dhamar resulting in the death of hundreds of abductees and forcibly hidden individuals, who had been illegally detained by Houthi armed group for years. The statement affirmed that Houthi armed group had abducted those civilians and prevented them from visits, food, and medications. 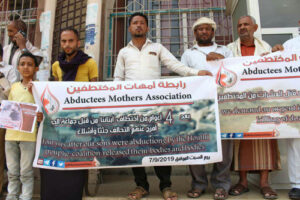 It, also, stated that abductees’ mothers and families had waited all those years to see their beloved ones free. However, they ended up seeing them as dead bodies and dismembered body parts. 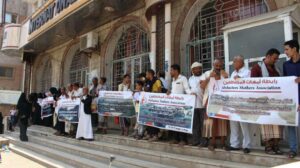 Rally participants carried protesting banners that held Arab Coalition and Houthi armed group responsible for the crime, stated that such crimes and not time-barred, and demanded the immediate release of all abductees and forcibly hidden individuals.