Afrah Al-Akhali, the association’s Foreign Relations Officer, said “our suffering is worsening everyday as our sons are held at prisons with terrible conditions, repeatedly subjected to brutal torture, and prevented from medical care amid the spread of different diseases at prisons, endangering their lives and safety. “ 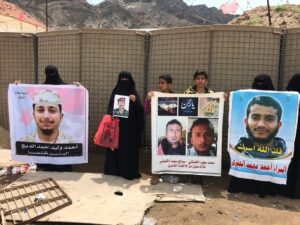 Al-Akhali stated that the International Humanitarian Law and all UN conventions criminalize the unwarranted abduction of civilians by either Houthi armed group or STC, stressing on the importance of the intervention of international competent authorities to fulfill their duties and support the case of thousands of abductees.

She called international authorities to step up the pressure upon Houthi armed group and STC in order to force them release all abductees and arbitrarily arrested and forcibly disappeared persons.

She referred to the reports published by the UN regarding abductees’ conditions at prisons, and demanded the release of all abductees held at Houthi and STC prisons.