Today, Abductees’ Mothers Association carried out a protesting rally by the OHCHR in Sana’a.
The association stated that international conventions regarding the case of their abducted, forcibly disappeared, and arbitrarily detained sons had been ignored one after another with no implementation and had been intentionally derailed. 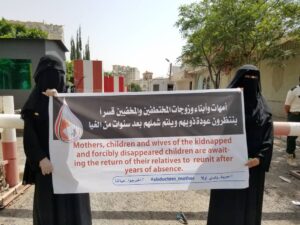 The rally statement claimed that there was no imminent breakthrough to implement Stockholm Agreement and Riyadh Agreement, specifically the terms of abductees and forcibly disappeared persons. It demanded all abducting authorities, namely Houthi armed group, Southern Transitional Council, and the government, to unconditionally release all abductees and forcibly disappeared and arbitrarily detained persons who have been arrested based on their political believes, opinions, and affiliations, as a commitment to their duties.

The statement reaffirmed the demands of bringing the perpetrators of abduction, detention, forced disappearance, and torture crimes to justice and eliminating all checkpoints which are used to unlawfully detain men, women, and children. It stressed on the importance of closing down all unofficial and secret prisons in which human rights are violated. 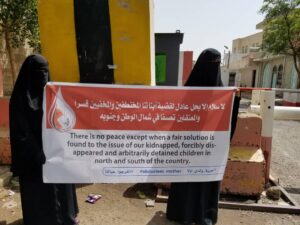 In the rally, mothers stressed on the responsibility of the United Nations and Security Council to urge all abducting parties to implement all conventions signed under the auspices of the UN to release all abductees, and to abide by all international conventions and laws. It was concluded by expressing mothers, wives, and children longing for their reunion with their beloved ones.