Today Abductees’ Mothers Association participated at the ceremony of International Women’s Day in Aden, titled No Fair Empowerment Except by True Inclusion of Women in Decision Making.

During the ceremony, Seham Ahmed Qasem, a member of Abductees’ Mothers Association in Aden, made a speech congratulating women in Yemen and all over the world on their international day.

She explained that the humanitarian activity of the of association, under women leadership, has set an example of the effectivity of Yemeni women, as the association works on the cases of abductees and arbitrarily arrested and forcibly disappeared persons, and helps releasing abductees and granting them rights, enforcing the authority of law, and raising public awareness of human rights.

Qasem stated that the association has held different helpful activities including meeting up with 287 public figures and international and local organizations in order to elaborate the suffering of the victims and their families. 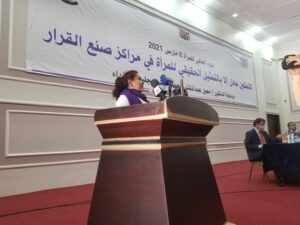 She, also, spoke of 8 reports and 248 press releases issued by the association in order to support human rights in Yemen, as well as the documentation of 2310 cases of abduction, arbitrary arrest, forced disappearance, and torture, 19 of which were of women.

Qasem, additionally, talked about the association’s 253 peaceful rallies held in Sana’a, Aden, Alhudaydah, Taiz, Hajja, Ibb, and Marib, demanding to grant abductees and forcibly disappeared persons their human and legal rights. She stressed on the role of such efforts to prioritize the case of abduction and its inclusion in peacebuilding efforts and agreements, making it the only case that made tangible process. These efforts have, also, helped release more than 900 abductees, including 147 forcibly disappeared persons, and two women who had been unlawfully abducted by Houthi armed group. 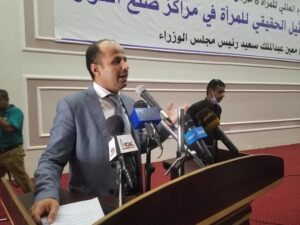