Abductees’ Mothers Association participated, today, in the CIV-MIL Dialogue Forum in Ma’rib. The forum was organized by Center for Civilians in Conflict and in collaboration with Ministry of Interior in Ma’rib.

Many human rights organizations and police and security officers attended the forum. Different cases and papers were presented including the cases of abduction and forced disappearance, prison reforms, and police officers’ relationship with organizations. 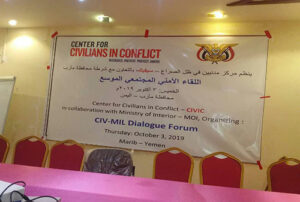 In a presentation titled Arbitrary Arrest and Detention by Houthi Armed Group and Yemeni Government, Abductees’ Mothers Association representative stated that, in the past four years, 6000 civilians have been abducted by Houthi armed group, and 2400 abductees are still in detention till this day. In the other hand, while 90 abductees have been released in Aden, there are 36 hidden individuals there. The representative talked about the mistreatment, and physical and psychological torture carried out by Houthis against abductees, which resulted in the death of 104 abductees. 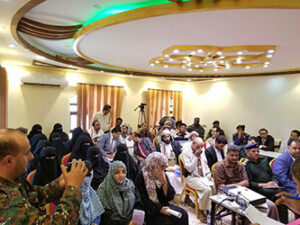