Abductees’ Mothers Association held, this morning, a protesting rally in the memory of Community College Prison bombing victims. The bombing resulted in the death of 100 abductees after targeting the prison by coalition air force at the beginning of September. The prison itself was originally a community college turned, by Houthi armed group, into a detention center holding dozens of abductees and forcibly hidden individuals. 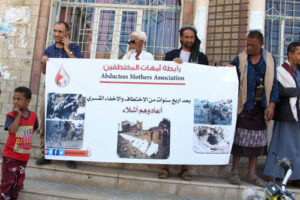 Abductees’ Mothers Association in Taiz called upon International Red Cross and the United Nations to immediately intervene to help the families that were unable to collect their relatives’ bodies due to inhuman and illegal procedures, lack of information because of enforced disappearance, inaccuracy of the information provided by Houthis, or the financial incapability of families to move and bury their sons as the UN and IRC had a great role in releasing 30 survivors of the incident recently. 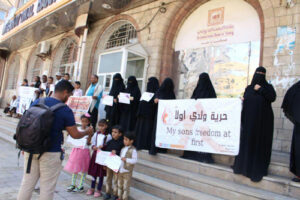 In the rally statement, mothers confirmed that there were 27 cases of identified bodies, and only 20 of them could be buried despite detaining other family members by Houthi armed group for days. The statement added that there were 32 missing abductees from Taiz who turned to unrecognizable body parts as Houthis claimed. These body parts were collected by Houthi armed group in huge plastic bags and preserved in bad conditions causing them to rot. Additionally, Houthis demanded families to have them DNA checked in order to find out which parts belongs to whom. 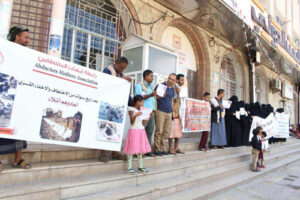 The statement talked about the wife of the abductee Adeeb Ali Al-Futaih who stated that she saw and recognized her husband’s body on TV, namely AlMasirah channel. Yet, when she went to collect the body for burial, she did not find it. She accused Houthis of hiding her husband’s body. It also talked about Jawad Al-Sheikh’s case whose name was found on the list of victims issued by Houthi armed group. However, Jawad was not at the Community College Prison during the airstrikes as he had been admitted a week earlier due to angina and his health condition is still bad until today. 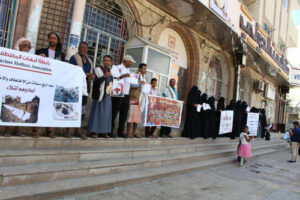 The statement held Houthi armed group and the Arab Coalition responsible for the mass murder of abductees considering it an imprescriptible crime against humanity. It demanded the United Nations and its Security Council to bring the perpetrators to justice and to place the needed pressure in order to unconditionally and immediately release all the abductees and forcibly hidden individuals.