The humanitarian cause of our abducted and forcibly hidden sons is disregarded while their suffering is worsening daily in Aden. Our sons are merely civilians who had been abducted from their homes and from public places, and have been subjected to brutal torture, beating, and inhumane mistreatment. Their living and health conditions have deteriorated. Some of them have been forcibly hidden for as long as three years, and their fate is currently unknown as all legal procedures have been put on hold. 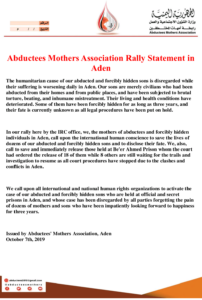 In our rally here by the IRC office, we, the mothers of abductees and forcibly hidden individuals in Aden, call upon the international human conscience to save the lives of dozens of our abducted and forcibly hidden sons and to disclose their fate. We, also, call to save and immediately release those held at Be’er Ahmed Prison whom the court had ordered the release of 18 of them while 8 others are still waiting for the trails and investigation to resume as all court procedures have stopped due to the clashes and conflicts in Aden.

We call upon all international and national human rights organizations to activate the case of our abducted and forcibly hidden sons who are held at official and secret prisons in Aden, and whose case has been disregarded by all parties forgetting the pain of dozens of mothers and sons who have been impatiently looking forward to happiness for three years.