Our abducted sons declared going on hunger strike since March 12th, 2020. Their only demands are justice and freedom as they have been detained for three years with no lawful justification or accusations and despite issuing release orders for them. 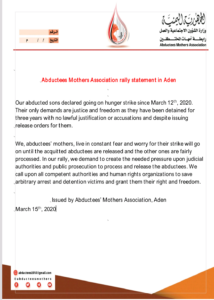 We, abductees’ mothers, live in constant fear and worry for their strike will go on until the acquitted abductees are released and the other ones are fairly processed. In our rally, we demand to create the needed pressure upon judicial authorities and public prosecution to process and release the abductees. We call upon all competent authorities and human rights organizations to save arbitrary arrest and detention victims and grant them their right and freedom.