It has been a week since the coalition air force targeted Community College prison in Dhamar. The crime resulted in the death of hundreds of abductees and forcibly hidden individuals, and many others are still missing. Those abductees have been detained by Houthi armed group for four years. They had been prevented from family visits, food, and water during those four years, only to be handed in as dead bodies and dismembered body parts to their families after the airstrikes. 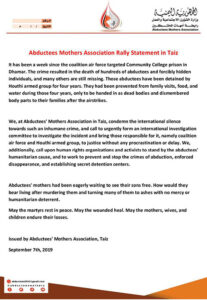 We, at Abductees’ Mothers Association in Taiz, condemn the international silence towards such an inhumane crime, and call to urgently form an international investigation committee to investigate the incident and bring those responsible for it, namely coalition air force and Houthi armed group, to justice without any procrastination or delay. We, additionally, call upon human rights organizations and activists to stand by the abductees’ humanitarian cause, and to work to prevent and stop the crimes of abduction, enforced disappearance, and establishing secret detention centers.

Abductees’ mothers had been eagerly waiting to see their sons free. How would they bear living after murdering them and turning many of them to ashes with no mercy or humanitarian deterrent.

May the martyrs rest in peace. May the wounded heal. May the mothers, wives, and children endure their losses.