On July 28th, 2020, Houthi armed group transferred 18 abductees from Alsaleh Prison in Taiz to Central Security Base in Sana’a, claiming to release them in prisoners swap deals. All their personal belongings were left in Alsaleh Prison, they only had the the clothes they were wearing during the transfer. However, Houthis have neither released them, nor let their relatives visit them in order to check up on them.

The transfer to a military base and the false promises of release are taking place as the memorial of bombing Community College Prison in Dhamar, which resulted in the death of 51 abductees from Taiz, comes closer. Thus, mothers’ worries have doubled, knowing that Central Security Base has been repeatedly targeted by coalition air force. 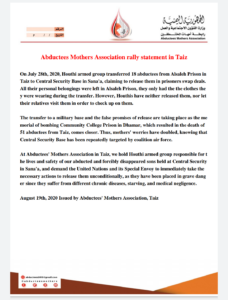 At Abductees’ Mothers Association in Taiz, we hold Houthi armed group responsible for the lives and safety of our abducted and forcibly disappeared sons held at Central Security in Sana’a, and demand the United Nations and its Special Envoy to immediately take the necessary actions to release them unconditionally, as they have been placed in grave danger since they suffer from different chronic diseases, starving, and medical negligence.