While Yemenis are eagerly awaiting the implementation of Stockholm agreement and the release of their abducted and forcibly hidden sons, Houthi armed group continues abducting civilians and carry out various types of torture in prisons.

Last week, Abductees’ Mothers Association was informed of the death of the 22-year-old abductee Tawfeeq Ahmed Mohammed Al-Haji. He was abducted by Houthis on February 25th, 2016 from Al-Mukha and was forcibly hidden for 6 months. After that, his family was notified that he was held at Al-Saleh town in Taiz. 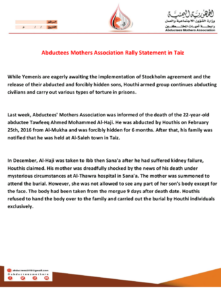 In December, Al-Haji was taken to Ibb then Sana’a after he had suffered kidney failure, Houthis claimed. His mother was dreadfully shocked by the news of his death under mysterious circumstances at Al-Thawra hospital in Sana’a. The mother was summoned to attend the burial. However, she was not allowed to see any part of her son’s body except for the face. The body had been taken from the morgue 9 days after death date. Houthis refused to hand the body over to the family and carried out the burial by Houthi individuals exclusively.

In our rally, we, abductees’ mothers, hold Houthi armed group fully responsible for the abduction and death of Al-Haji and for the freedom of all our abducted and forcibly hidden sons held in their prisons.

We, furthermore, call upon the UN and its Special Envoy to Yemen, as guarantors and sponsors of Stockholm agreement, to take the necessary measures to protect the abductees and enforced disappeared, and to grant them their rights. We also call upon them to hold those responsible for the grave rights violations of our abducted and forcibly hidden sons.