It is the International Day in Support of Victims of Torture, while hundreds of our abducted, imprisoned, and forcibly hidden sons are subjected to the worst forms of physical and psychological torture at Houthi prisons and those of military and security organizations in Aden. This inhumane torture has caused the death of more than 128 abductees.

Our sons’ lives, and physical and psychological welfare are targeted by systematic torture. They have been tortured while being forcibly hidden for months, isolated in solitary cells, shackled, beaten, suspended for long hours, sexually assaulted, cut with sharp objects, deprived from food, water, medications, and sunlight exposure, and many more brutal torture methods with no mercy or deterrence to stop this malice and cruelty. 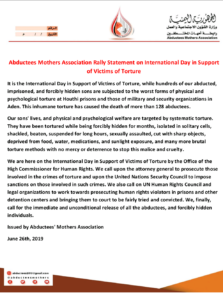 We are here on the International Day in Support of Victims of Torture by the Office of the High Commissioner for Human Rights. We call upon the attorney general to prosecute those involved in the crimes of torture and upon the United Nations Security Council to impose sanctions on those involved in such crimes. We also call on UN Human Rights Council and legal organizations to work towards prosecuting human rights violators in prisons and other detention centers and bringing them to court to be fairly tried and convicted. We, finally, call for the immediate and unconditional release of all the abductees, and forcibly hidden individuals.