Abductees’ Mothers Association greatly condemns bombing women Central Security Prison in Taiz this afternoon by Houthi armed group. The bombing resulted in the death of many inmates in a dangerous precedent that targeted women with no moral or humanitarian deterrence, devastating dozens of victims’ families.

Central Security Prison is identified by all parties as an official prison, and considered a civilian object protected by Geneva Conventions. Yet, Houthi armed group targeted the prison with its artillery and missiles. 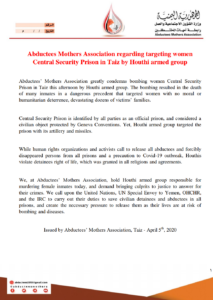 While human rights organizations and activists call to release all abductees and forcibly disappeared persons from all prisons and a precaution to Covid-19 outbreak, Houthis violate detainees right of life, which was granted in all religions and agreements.

We, at Abductees’ Mothers Association, hold Houthi armed group responsible for murdering female inmates today, and demand bringing culprits to justice to answer for their crimes. We call upon the United Nations, UN Special Envoy to Yemen, OHCHR, and the IRC to carry out their duties to save civilian detainees and abductees in all prisons, and create the necessary pressure to release them as their lives are at risk of bombing and diseases.