While we were hoping to see all abductees and forcibly disappeared persons free in Yemen, we were devastatingly shocked today to hear the new from the null and void Specialized Criminal Court in Sana’a, which was transferred to Ma’rib by the Supreme Judicial Council’s decree in 2018. Judge Mohammed Mufleh, who had been appointed by Houthi armed group, issued a political judgement to execute four journalists and imprison six others. The journalists who were sentenced to death are; Abdulkhaleq Amran, Tawfiq Al-Mansouri, Akram Al-Waleedi, and Hareth Humaid. The other six ones are Hesham Tarmoum, Hesham Al-Yousefi, Haitham Al-Shehab, Esam Belghaith, Hasan Annab, Salah Al-Qa’edi.

Houthi armed group abducted Salah Al-Qa’edi while he was on his way home on August 28th, 2015. The other nine journalists were abducted on June 9th, 2015 from Qasr Alahlam Hotel in Sana’a, where the journalists carried out their work. The hotel was besieged from 9p.m until 4a.m. Then, Houthis stormed the hotel and ransacked journalists’ belongings. Their only charge was working with journalism while Yemeni Press and Publications Law states that freedom of knowledge, thought, the press, expression, communication and access to information are rights of the citizen, and that the press shall be independent and shall have full freedom to practise its vocation and no obstacles may be placed in the way of its activities except in accordance with the provisions of Press and Publications Law. The law granted press the freedom to print what it pleases and to gather news and information from their sources, assured the protection of journalists and authors, and provideed the legal guarantees necessary for them to practice their profession, to enjoy freedom of expression and immunity from interference so long as they do not contravene the provisions of the law. 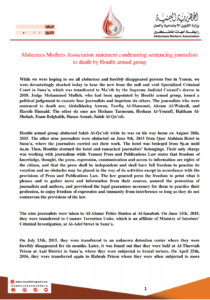 The nine journalists were taken to Al-Ahmar Police Station at Al-hasabah. On June 11th, 2015, they were transferred to Counter Terrorism Unite, which is an affiliate of Ministry of Interiors’ Criminal Investigation, at Al-Adel Street in Sana’a.

On July 13th, 2015, they were transferred to an unknown detention center where they were forcibly disappeared for six months. Later, it was found out that they were held at Al-Thawrah Prison at Azal District in Sana’a, where they were subjected to brutal torture. On April 25th, 2016, they were transferred again to Habrah Prison where they were often subjected to more torture. They declare going on hunger strike on May 9th, 2016 as a sign to demand their freedom. Houthi punished them by transferring them to an unknown destination after fiteen days. After three months of searching for them, Abdulkhaleq’s mother stood by Political Security Prison gates, supported by her crutch and Salah Al-Qa’edi’s mother for long days and hours, protesting with their tears and endurance. Finally, they were informed that the journalists had been detained at Political Security Prison in Sana’a.

During their forced disappearance, journalists were repeatedly tortured, filmed, and extorted. Their families paid huge sums of money to Houthi meditators for their release, were promised to be included in an amnesty decree. However, they were mere lies.

After signing Stockholm Agreement, Houthi armed group promised the journalists to release them in a few days, but it was only a new method of mental pressure and torture. 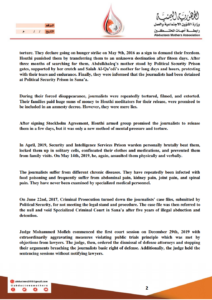 In April, 2019, Security and Intelligence Services Prison warden personally brutally beat them, locked them up in solitary cells, confiscated their clothes and medications, and prevented them from family visits. On May 14th, 2019, he, again, assaulted them physically and verbally.

The journalists suffer from different chronic diseases. They have repeatedly been infected with food poisoning and frequently suffer from abdominal pain, kidney pain, joint pain, and spinal pain. They have never been examined by specialized medical personnel.

On June 22nd, 2017, Criminal Prosecution turned down the journalists’ case files, submitted by Political Security, for not meeting the legal stand and procedure. The case file was then referred to the null and void Specialized Criminal Court in Sana’a after five years of illegal abduction and detention.

Judge Mohammed Mofleh commenced the first court session on December 29th, 2019 with extraordinarily aggravating measures violating public trials principle which was met by objections from lawyers. The judge, then, ordered the dismissal of defense attorneys and stopping their arguments breaching the journalists basic right of defense. Additionally, the judge held the sentencing sessions without notifying lawyers.

Such trials show the clear intentions of Houthi armed group to not implement Stockholm Agreement that clearly demands the release of all abductees, detainees, and forcibly disappeared persons. We hold Houthi armed group fully responsible for the lives, safety, and freedom of the abducted journalists. 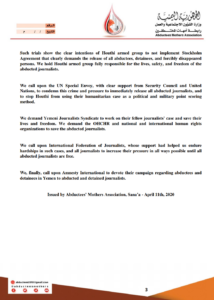 We call upon the UN Special Envoy, with clear support from Security Council and United Nations, to condemn this crime and pressure to immediately release all abducted journalists, and to stop Houthi from using their humanitarian case as a political and military point scoring method.

We demand Yemeni Journalists Syndicate to work on their fellow journalists’ case and save their lives and freedom. We demand the OHCHR and national and international human rights organizations to save the abducted journalists.

We call upon International Federation of Journalists, whose support had helped us endure hardships in such cases, and all journalists to increase their pressure in all ways possible until all abducted journalists are free.

We, finally, call upon Amnesty International to devote their campaign regarding abductees and detainees in Yemen to abducted and detained journalists.