We, at Abductees’ Mothers Association, have been monitoring the measures and actions taken by Yemeni warring parties in relation to our abducted and forcibly disappeared sons. Despite the great fear we feel amidst the breakout of Covid-19 pandemic, we have positively received authorities promises to release the abductees in Sana’a, government’s calls to implement Amman’s agreement, and all the calls made by the UN, special envoy to Yemen, and OHCHR to release prisoners of opinions as a measure to face Covid-19 where prisons are considered disease clusters the affect the whole society. 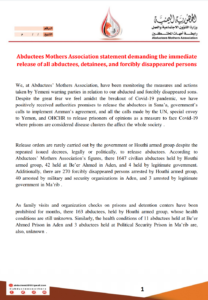 We hold Houthi armed group, legitimate government, and military and security organizations in Aden fully responsible for the safety of all abductees, detainees, forcibly disappeared persons, and demand their immediate release.

With our worried and terrified hearts, we extend the following calls and recommendations;

· We call upon the UN, its Special Envoy, and OHCHR to pressure Houthi armed group and legitimate government to release all abductees, arbitrary detainees, and forcibly disappeared persons, with no delay, as a step to implement Stockholm Agreement, which was signed more than a year ago, to release all abductees. The warring parties have also agreed on the mechanism of implementing prisoners swap in Jordan. The disagreements regarding the name lists submitted by both parties cannot by a reason for us to lose our sons due to the widely-spread pandemic, especially after reporting the first case in Yemen. We remind the warring parties that freedom is a right to all abductees and forcibly disappeared persons and that they must not be detained based on their political believes and affiliations. Hence, their release should be unconditional.

· We call upon the Attorney General in Aden to issue the needed orders to release the victims of arbitrary arrest and detention victims held at Be’er Ahmed Prison as they have been detained for three years.

· We call upon the committee formed by Arab Coalition to pressure the military and security organizations to urgently release all forcibly disappeared persons arrested by them as they are closer to the risk of being infected with Covid-19 more than anyone else.

May health and peace be restored around beloved country and the whole world.