It has been a year since Stockholm Agreement was signed. The agreement stated that war prisoners, abductees, detainees, and individuals who are forcibly hidden and put under house arrest shall all be exchanged between warring parties. The agreement itself was signed under the auspices of the United Nations and its Special Envoy to Yemen. All Yemeni parties and Arab Coalition approved on the articles agreement as a commitment to peace making principles which was mainly based on releasing all prisoners, abductees, forcibly hidden individuals, and people put under house arrest, from all parties, in regards to armed conflicts with no conditions or exceptions. Yet, no party has implemented the principle causing abductees’ and families’ suffering to double and turning hopes into pain and sorrow. 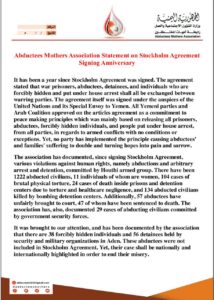 The association has documented, since signing Stockholm Agreement, various violations against human rights, namely abductions and arbitrary arrest and detention, committed by Houthi armed group. There have been 1222 abducted civilians, 11 individuals of whom are women, 104 cases of brutal physical torture, 24 cases of death inside prisons and detention centers due to torture and healthcare negligence, and 134 abducted civilians killed by bombing detention centers. Additionally, 57 abductees have unfairly brought to court, 47 of whom have been sentenced to death. The association has, also, documented 29 cases of abducting civilians committed by government security forces.

It was brought to our attention, and has been documented by the association that there are 38 forcibly hidden individuals and 56 detainees held by security and military organizations in Aden. These abductees were not included in Stockholm Agreement. Yet, their case shall be nationally and internationally highlighted in order to end their misery. 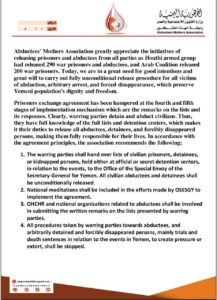 Abductees’ Mothers Association greatly appreciate the initiatives of releasing prisoners and abductees from all parties as Houthi armed group had released 290 war prisoners and abductees, and Arab Coalition released 200 war prisoners. Today, we are in a great need for good intentions and great will to carry out fully unconditional release procedure for all victims of abduction, arbitrary arrest, and forced disappearance, which preserve Yemeni population’s dignity and freedom.

Prisoners exchange agreement has been hampered at the fourth and fifth stages of implementation mechanism which are the remarks on the lists and its responses. Clearly, warring parties detain and abduct civilians. Thus, they have full knowledge of the full lists and detention centers, which makes it their duties to release all abductees, detainees, and forcibly disappeared persons, making them fully responsible for their lives. In accordance with the agreement principles, the association recommends the following; 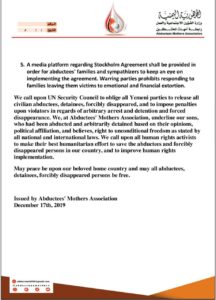 We call upon UN Security Council to oblige all Yemeni parties to release all civilian abductees, detainees, forcibly disappeared, and to impose penalties upon violators in regards of arbitrary arrest and detention and forced disappearance. We, at Abductees’ Mothers Association, underline our sons, who had been abducted and arbitrarily detained based on their opinions, political affiliation, and believes, right to unconditional freedom as stated by all national and international laws. We call upon all human rights activists to make their best humanitarian effort to save the abductees and forcibly disappeared persons in our country, and to improve human rights implementation.

May peace be upon our beloved home country and may all abductees, detainees, forcibly disappeared persons be free.