The International Day of the Disappeared, August 30th, has been made to draw attention to the fate of people held under poor circumstances unknown to their relatives and legal representatives which greatly violates international laws created to protect people’s dignity and rights. On this day, dozens of abductees’ mothers are still struggling to learn the fates and whereabouts of their forcibly hidden sons.

According to Abductees’ Mothers Association’s latest figures, there are 721 forcibly hidden abductees around the areas under Houthis control, 30 others in Aden’s detention centers controlled by UAE-supported armed groups. Furthermore, Abductees’ Mothers Association continues to receive reports from different enforced disappearance victims’ families on a regular basis. 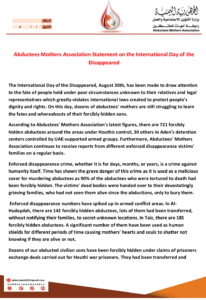 Enforced disappearance crime, whether it is for days, months, or years, is a crime against humanity itself. Time has shown the grave danger of this crime as it is used as a malicious cover for murdering abductees as 90% of the abductees who were tortured to death had been forcibly hidden. The victims’ dead bodies were handed over to their devastatingly grieving families, who had not seen them alive since the abductions, only to bury them.

Enforced disappearance numbers have spiked up in armed conflict areas. In Al-Hudaydah, there are 142 forcibly hidden abductees, lots of them had been transferred, without notifying their families, to secret unknown locations. In Taiz, there are 185 forcibly hidden abductees. A significant number of them have been used as human shields for different periods of time causing mothers’ hearts and souls to shatter not knowing if they are alive or not.

Dozens of our abducted civilian sons have been forcibly hidden under claims of prisoners exchange deals carried out for Houthi war prisoners. They had been transferred and disappeared for around six months where abductees and their families were extorted, psychologically and financially, and put under immense pressure.

Our enforced disappeared abductees are not merely numbers in a news report. Their suffering is the misery of their mothers, fathers, siblings, and friends. Their children go through the trauma of losing their fathers which leads to different types of psychological instabilities such as anxiety, stress, and depression, resulting in long-term troubled futures and dreams. 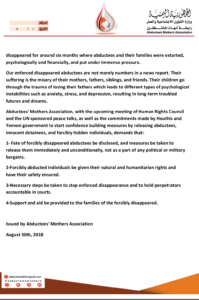 Abductees’ Mothers Association, with the upcoming meeting of Human Rights Council and the UN sponsored peace talks, as well as the commitments made by Houthis and Yemeni government to start confidence building measures by releasing abductees, innocent detainees, and forcibly hidden individuals, demands that: