Abductees’ mothers have been hopefully looking forward to releasing their abducted and forcibly hidden sons, bearing in their hearts the anxiety and fear of revoking the agreement terms by one of the signing parties. Stockholm agreement, which was settled a few days ago and had been sponsored by the United Nations, states that the abductees’ must be released. We, abductees’ mothers, would like to send our appreciation to the UN Special Envoy, Mr. Griffiths, for his great efforts to free our sons. We, in addition, would like to notify him, along with Yemeni public and peace-fostering nations, of Houthis’ violations, despite the agreement signing, which are as follows; 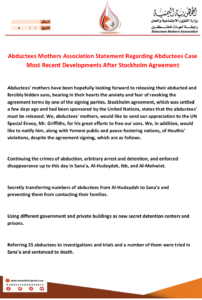 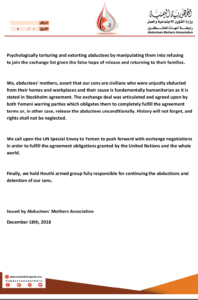 We, abductees’ mothers, assert that our sons are civilians who were unjustly abducted from their homes and workplaces and their cause is fundamentally humanitarian as it is stated in Stockholm agreement. The exchange deal was articulated and agreed upon by both Yemeni warring parties which obligates them to completely fulfill the agreement terms or, in other case, release the abductees unconditionally. History will not forget, and rights shall not be neglected.

We call upon the UN Special Envoy to Yemen to push forward with exchange negotiations in order to fulfill the agreement obligations granted by the United Nations and the whole world.

Finally, we hold Houthi armed group fully responsible for continuing the abductions and detention of our sons.