Our abducted sons held at Be’er Ahmed Prison in Aden declared their hunger strike in protest against their incarceration despite the issued release order.

We, the mothers of abductees and forcibly hidden individuals in Aden, are worried about the conditions of our sons at Be’er Ahmed Prison. We demand Minister of Justice, Minister of Interior, and Attorney General to immediately release the 15 abductees whom the court ordered their release 6 months ago, to treat them fairly, and to quickly take the decisive and necessary steps to process the other abductees held in that prison for over a year. 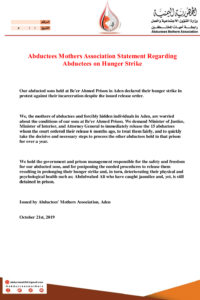 We hold the government and prison management responsible for the safety and freedom for our abducted sons, and for postponing the needed procedures to release them resulting in prolonging their hunger strike and, in turn, deteriorating their physical and psychological health such as; Abdulwahed Ali who have caught jaundice and, yet, is still detained in prison.