Our abducted sons held at Be’er Ahmed in Aden declared going on a hunger strike for the second month within a month in a protest against the continuous incarceration despite the issued release order, postponing referring other abductees to court, and denying healthcare rights. Abductees’ Mothers Association disapproves completely excluding the file of abductees and forcibly hidden individuals from Jeddah Agreement. The devastation of mothers should not have been overlooked. Abductees’ Mothers Association sent an official memo, last week, to President Abdrabbuh Mansur Hadi asking him to include abductees’ freedom and dignity as priority in negotiation agenda, and closing down all secret and unofficial detention centers as a way to support social peace integration and stability. 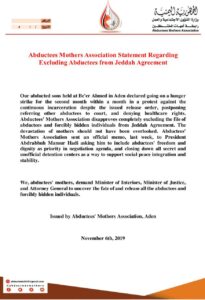 We, abductees’ mothers, demand Minister of Interiors, Minister of Justice, and Attorney General to uncover the fate of and release all the abductees and forcibly hidden individuals.