As a part of its constant efforts to uncover the fate of forcibly disappeared abductees and to grant them their humanitarian and legal rights, Abductees’ Mothers Association met today with several security and military commanders and prison wardens. The association had been invited for the meeting by colonel Abu Sultan of Arab Coalition as an answer to their repeated demands for their sons’ freedom.

During the meeting, colonel Abu Sultan urged to the attending military and security commanders to listen mothers’ demands, and assured mothers that it was their right to know their sons’ fate and end the prolonged suffering. Mothers were sincere and truthful in their conversations regarding the abduction circumstances and the authorities responsible for it. 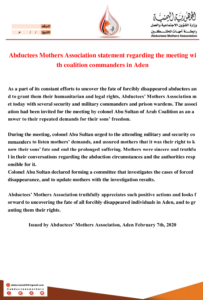 Colonel Abu Sultan declared forming a committee that investigates the cases of forced disappearance, and to update mothers with the investigation results.

Abductees’ Mothers Association truthfully appreciates such positive actions and looks forward to uncovering the fate of all forcibly disappeared individuals in Aden, and to granting them their rights.