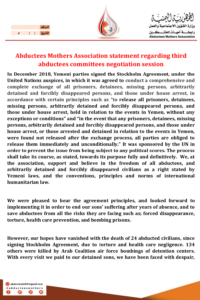 We were pleased to hear the agreement principles, and looked forward to implementing it in order to end our sons’ suffering after years of absence, and to save abductees from all the risks they are facing such as; forced disappearance, torture, health care prevention, and bombing prisons.

However, our hopes have vanished with the death of 24 abducted civilians, since signing Stockholm Agreement, due to torture and health care negligence. 134 others were killed by Arab Coalition air force bombings of detention centers. With every visit we paid to our detained sons, we have been faced with despair, misery, and human indignity. And whenever a local meditation works to release abducted civilians, Houthi armed group refuses it with the excuse of having the names listed in Stockholm Agreement lists.

Recently, representatives from Yemeni parties have met in Jordan and agreed on a detailed process to implement the first official exchange for abductees and war prisoners since the beginning of the war. It is the first step to implement the commitment of both parties of the abductees and detainees release in accordance with Stockholm Agreement, as described by the office of UN Special Envoy to Yemen and IRC committee. Parties agreed to immediately start submitting name lists to prepare for the upcoming swap deal. 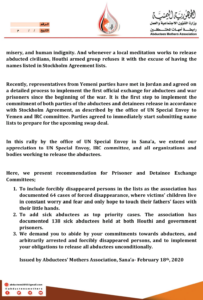 In this rally by the office of UN Special Envoy in Sana’a, we extend our appreciation to UN Special Envoy, IRC committee, and all organizations and bodies working to release the abductees.

Here, we present recommendation for Prisoner and Detainee Exchange Committees;

1. To include forcibly disappeared persons in the lists as the association has documented 64 cases of forced disappearance, where victims’ children live in constant worry and fear and only hope to touch their fathers’ faces with their little hands.

3. We demand you to abide by your commitments towards abductees, and arbitrarily arrested and forcibly disappeared persons, and to implement your obligations to release all abductees unconditionally.