It has been reported to us, at Abductees’ Mothers Association, that this morning Houthi armed group forcibly put 400 abductees in air force uniform and took them to Central Security Camp in Alsab’een area after given the false notion of being released. 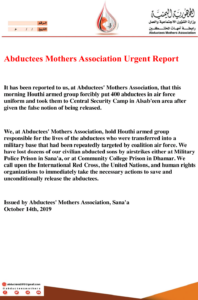 We, at Abductees’ Mothers Association, hold Houthi armed group responsible for the lives of the abductees who were transferred into a military base that had been repeatedly targeted by coalition air force. We have lost dozens of our civilian abducted sons by airstrikes either at Military Police Prison in Sana’a, or at Community College Prison in Dhamar. We call upon the International Red Cross, the United Nations, and human rights organizations to immediately take the necessary actions to save and unconditionally release the abductees.