Abductees’ Mothers Association has learnt that the health condition of the abductee Abdulilah Seylan, an interior design student, has critically deteriorated as a result of severe torture at Political Security Prison in Sana’a. Prison wardens have deliberately neglected Seylan’s health causing the loss of ability to stand up properly on his own. 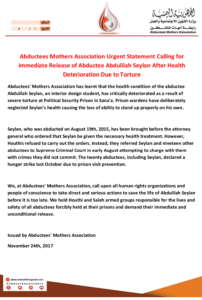 Seylan, who was abducted on August 19th, 2015, has been brought before the attorney general who ordered that Seylan be given the necessary health treatment. However, Houthis refused to carry out the orders. Instead, they referred Seylan and nineteen other abductees to Supreme Criminal Court in early August attempting to charge with them with crimes they did not commit. The twenty abductees, including Seylan, declared a hunger strike last October due to prison visit prevention.

We, at Abductees’ Mothers Association, call upon all human rights organizations and people of conscience to take direct and serious actions to save the life of Abdulilah Seylan before it is too late. We hold Houthi and Saleh armed groups responsible for the lives and safety of all abductees forcibly held at their prisons and demand their immediate and unconditional release.