Abductees’ Mothers Association condemns and disapproves the groundless convictions of thirty abductees who were sentenced to death by hanging after the trials of thirty-six abductees. The court order was ruled this morning by Supreme Criminal Court which lacks jurisdiction according to decree 15 of Supreme Judicial Council of the year 2018. The hearing was headed by Houthi-appointed judge Abdu Rajeh who stated that the sentence will be carried out in fifteen days’ time. 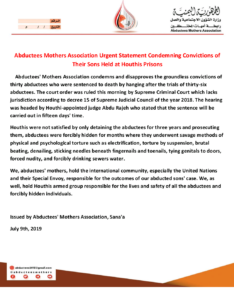 Houthis were not satisfied by only detaining the abductees for three years and prosecuting them, abductees were forcibly hidden for months where they underwent savage methods of physical and psychological torture such as electrification, torture by suspension, brutal beating, denailing, sticking needles beneath fingernails and toenails, tying genitals to doors, forced nudity, and forcibly drinking sewers water.

We, abductees’ mothers, hold the international community, especially the United Nations and their Special Envoy, responsible for the outcomes of our abducted sons’ case. We, as well, hold Houthis armed group responsible for the lives and safety of all the abductees and forcibly hidden individuals.