Abductees’ Mothers Association held an exceptional protesting rally from their homes in Sana’a, Aden, Al-Hudaydah, Taiz, and Ma’rib today, April 18th 2020, which is Yemeni Abductee’s Day. Mothers extended their calls to save their abducted sons. Mothers held their rally online as a practice of social distancing to fight Covid-19.

The disease has doubled the fears for the lives of hundreds of abducted, forcibly disappeared, and arbitrarily arrested civilians. A lot of journalists and students, who were abducted from their homes and workplace based on their political opinions, believes, and affiliation, have been victims of abduction and forced disappearance. 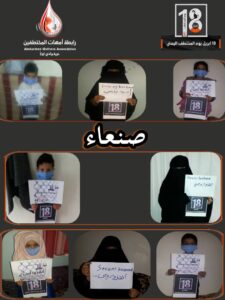 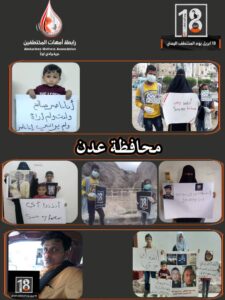 The rally statement explained that Stockholm Agreement was signed by the end of 2018, which stated many principles like releasing all prisoners, detainees, missing persons, and arbitrarily detained and forcibly disappeared persons, held in relation to the events in Yemen, without any exceptions or conditions, for the purpose of resolving this fully and definitively. However, both parties never fully implemented the agreement. It had been stopped at the first step of submitting prisoners lists and remarks for more than a year, despite Amman Consultations. 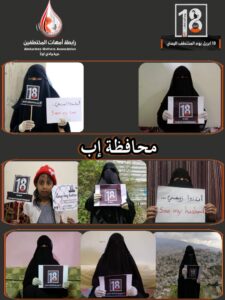 The statement condemned sentencing four journalists to death by Houthi armed group, last week, in a null and void trial and previously trying 47 other abductees unlawfully, and sentencing 30 of them, many of whom were academics and students, to death in a single hearing. It also condemned repeatedly subjecting abductees to all kinds of violations including; forced disappearance, torture, beating, mistreatmen 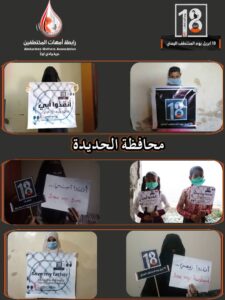 The statement called upon the UN Secretary-General, the Security Council, and the UN Special Envoy to compel all parties to release all abductees and arbitrarily arrested persons, to seriously and fairly deal with perpetrators of abductions, forced disappearance, and torture, and to create the necessary pressure to release all abductees, as the whole world focuses on combating Covid-19. 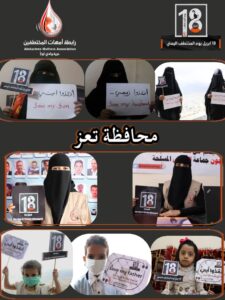 It demanded Houthi armed group, military and security organizations in Aden, and the legitimate government to release all abductees unconditionally.

The statement elaborated on mothers’, wives’, and children’s suffering for long years as abduction had unfairly made them lose any feeling of happiness and joy they used to feel during occasions. And as the sixth Ramadan is drawing near, abduction parties continue their intransigence and injustice. 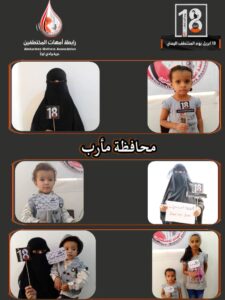 Mothers concluded their statement by extending their appreciation and gratitude to whoever stood by their cause, especially women alliances and human rights organizations, and calling them to generate more efforts until all abductees are free.