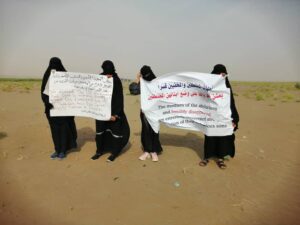 In today’s rally, the association stated that they had monitored almost 60 abductees from Al-Hudaydah who are currently detained at Central Security Prison in Sana’a, and held Houthi armed group responsible for the lives and safety of all abductees and forcibly disappeared persons.

The rally statement listed the sick abductees, urging for their immediate release, as follows; Abdu Hasan Haidar, 53, Ja’afar Mohammed Dakhnah, Yeheya Khawfani, Khaled Al-Olofi, Khaled Haider Sukkar, Ahmed Khameesi, Abkar Harad, Khaled Ghayath, who is suffering from slipped disc, Ali Ebrahim Mua’den, suffering from gastritis and vomiting everything, Fu’ad Ziad, suffering from seizure and his condition have deteriorated due to starving in prison, Mohammed Abkar Al-Ahdal, suffering from diabetes causing him to faint more than once a day, and Abduljalil Al-Jaradi, suffering from mental disorder. 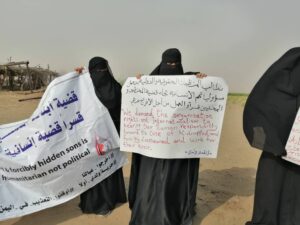 The statement explained that abductees’ families, mainly their mothers and wives, had endured the hardships and difficulties of displacement and searching for their relatives and struggled while contacting competent authorities in order to have their detained relatives released, but to no avail.

The statement condemned prolonging the detention of abductees for years while their mothers await them with broken hearts, calling upon the United Nations to place the needed pressure upon Houthi armed group in order to release all our abducted and forcibly disappeared sons from Central Security Prison in Sana’a unconditionally, especially the sick ones.