Abductees’ Mothers Association in Taiz stated that dozens of their sons had been subjected to various types of brutal torture, physically and psychologically at Alsaleh Prison at Alhawban area by Houthi armed group during a protesting rally held this morning by the governorate’s administration building. 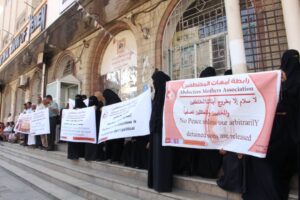 In the rally statement, the association said that many former abductees had been interviewed by the association and talked about the different types of torture they were subjected to at Alsaleh Prison such as Alshawaya, the barbeque where an abductee’s hands and legs were tightly tied up and hang by long bar for hours in a pose similar to a barbequed animal. Many abductees had been tortured by fire where a blindfolded and shackled abductee was forced to sit on a heated up cooker. 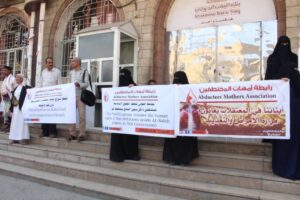 The statement added that the association in Taiz had documented 156 abduction cases where victims have been held at Alsaleh Prison, which had been turned by Houthis from commercial and residential building to prisons for hundreds of men and many women, until this day. 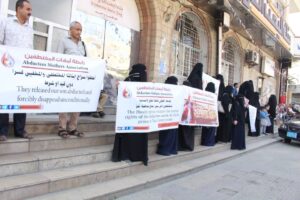 The statement demanded the UN to urgently find a fair resolution for abduction and forced disappearance victims’ cause, to keep their case away from political bargains and deals, and to immediately and unconditionally take actions to release them.
It called upon Yemeni legitimate government and human rights organizations to carry out their humanitarian duties regarding the cause of the abductees. 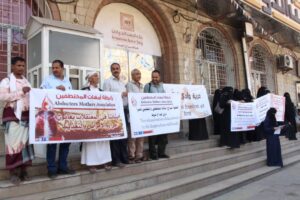 The statement assured that there were dozens of official and secret unofficial prisons where Houthi armed group unlawfully held hundreds of civilians at Houthi-controlled areas.

Mothers concluded their rally by calling upon human rights activists and journalists to make the necessary efforts to internationally highlight the abductees’ situation as mothers and wives had been feeling let down for years.