Ahmed Al-wahashi died at Habrah Prison, leaving four orphaned children. This news was leaked while the family of the struggling young car mechanic was hoping to see him free for he did not work with any political party.

At a dismal night, the abductees locked up at Habrah Prison got more worried and anxious hearing, repeatedly, an unknown screaming voice. However, that voice stopped sometime after midnight. Peeking through the holes of cells block windows, they noticed suspicious and restless movements among Houthie officers. Among those officers were the officer in charge of torture, Hani Al-suraihi, and his assistant, Abdulkhaleq Al-matari, and others like the prison wardens, Ali Yahya Al-humail, known as Abu Ali, and Riyadh, known as Abu Ahmed. After that, the abductees heard an ambulance which secretly came to take the Ahmed Al-wahashi’s body to Alkuwait Hospital morgue. The body was kept there for twenty days. 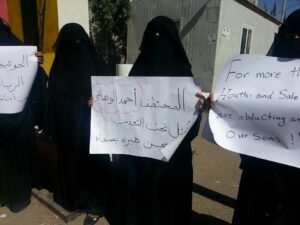 Only fourteen days of enforced disappearance was enough to result in his death. Ahmed Al-wahashi was abducted on October 15th, 2017 from his home in Methouqeen village, Al-baydha, and was killed on October 28th, 2017. His family only found out where he was held twenty days after his murder, when a Houthi officer called them to hand in the body.

Al-Wahashi was brutally tortured and beaten for two weeks, which resulted in death due to broken neck and spine. Houthis tried to pressure his family, after forcing them to bury him with no demand of rights or investigation, to accept a compensation of 10 million Yemeni Rial. The compensation was a result of fear after the violators and culprits were known to public of being murderers in illegitimate prisons.