Abductees and forcibly disappeared and arbitrarily detained persons held at Aden’s prisons have been suffering severe health deterioration, which led to spread of different symptoms including; shortness of breath, fever, joint pain, and loss of smell and taste senses. 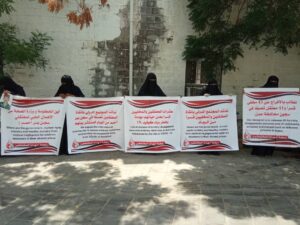 Their medical conditions have worsened on a daily basis, leading to the blackout of many due to high fever, as two abductees had been placed in isolation in Aden whereas the rest were given a few medications while being held at an unclean environment and were regularly provided with inefficient and inadequate meals.

All these are happening amidst the breakout of COVID-19, scorching heatwave, and long hours of electricity blackout. 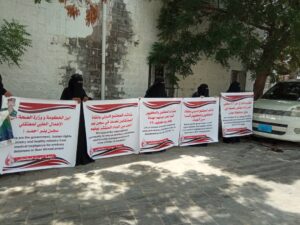 Today, August 29th, Abductees’ Mothers Association held a protesting rally, by the Local Council and Ministry of Human Rights in Aden, to reiterate its calls to save the abductees.

The association called upon the International Committee of the Red Cross and the Office of the High Commissioner for Human Rights to urgently intervene and mount the needed pressure to allow their forcibly disappeared and arbitrarily detained sons to have the necessary medical examinations, mainly COVID-19 checks and treatment, and provide the needed medications under the observation of specialized medical team, as their medical condition was critical and could not be ignored.

The association had previously documented the cases of 40 detainees held at Be’er Ahmed Prison, and taken the statements which claimed that there had been at least 117 detainees held at the same prison around the middle of last July.

The detention conditions are horrible, and the specialized medical care is non-existent. Moreover, families are not allowed to provide their detained relatives with medications. The medications provided by the prison administration are merely painkillers without any medical examinations or reports.

It held Security Belt Forces, controlled by the Southern Transitional Council, responsible for the lives of their arbitrarily detained sons, who were held at Be’er Ahmed Prison and different secret detention centres.

Mothers called upon the United Nations and human rights organizations to step up the pressure in order to grant the arbitrarily detained and forcibly disappeared persons all their rights, mainly medical care and contacting people outside prisons, and to take the necessary actions to guarantee that such crimes would not go unpunished.