In Aden, Abductees’ Mothers Association held a protesting rally, this morning by the Judicial Complex, demanding the head of the investigating committee in charge of the case of forcibly disappeared and arbitrarily arrested persons, Judge Nabil Jawbah, to disclose the investigation outcomes, as the investigation period he had previously proposed, on August 12th, has ended. 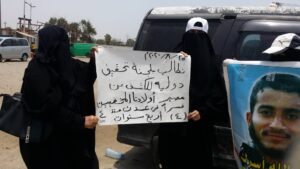 Mothers met with judge Nabil Jawbah, during the rally, who said that the committee was still receiving reports from the forcibly disappeared persons’ families, and they would start working by coordinating with competent authorities once all reports were received. 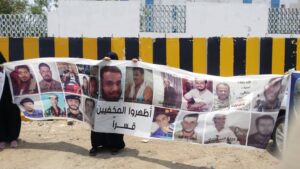 The rally statement demanded uncovering the fate of the 38 victims, who had been forcibly disappeared for 4 years, and their fate and medical conditions were still unknown, and stopping prolonging and derailing the legal processes in order to release them.

Mothers stressed on continuing their protesting rallies until their sons are free and compensated.