In Marib, Abductees’ Mothers Association organized, this morning, a workshop for police officers in the context of empowering the rule of law, and in conjunction with the International Day Against Police Brutality, March 15th.

During the workshop, Khaled Al-Raimi, a lawyer, spoke of the reason behind celebrating the International Day Against Police Brutality, the definition of brutality, and deterring brutality by security procedures. He defined police brutality as the excessive use of power which can multiply and turn to violations.

Ulfat Al-Refa’i, a lawyer and an association member, discussed the violations against detainees in Marib’s prison, as monitored by Abductees’ Mothers Association, and challenges she faces while working in Marib. She highlighted the efforts made by the authorities on the legal procedures, which are not completely satisfactory. 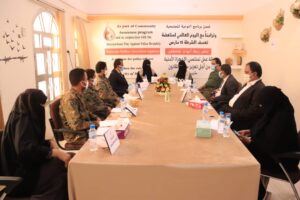 Ammar Al-Bukhaiti, a lawyer and head of police human resource department, explained that the actions taken by NGOs to stop the violations must be abided by the legal processes in order to protect the security agencies and the society as a whole.

Judge Adel Hamzi, a Trial Prosecution member, expressed his appreciation of the coordination between the general prosecution and police stations, which led to the success made on ground.

Several lawyers declared that authorities had referred many cases of detainees to competent authorities to carry out the legal procedures.

Workshop participants, who run prisons and police stations, spoke of the obstacles they endure at work, as they get more complex at these times of war and targeting the city every once in a while.

In a similar context, attendees extended their appreciation to Abductees’ Mothers Association for all the efforts made to raise the legal awareness, and stressed on the need to carry out more similar workshops.

The workshop was concluded by presenting several recommendations including;

_Proposing the improvements needed to help empowering the rule of law and carrying out the legal procedures of detainees held at Marib’s prisons.

_Working to build confidence between security and judicial authorities and NGOs.