In Aden, Abductees’ Mothers Association met up with Mari Luis, a member of Panel of Experts formed by the Security Council Resolution 2140 (2014) on Yemen, at the office of UN’s Special Envoy.

During the meeting, different topics were discussed regarding the violations against arbitrarily detained and forcibly disappeared persons at prisons and detention centers in Aden, including torture.

After handing her a list of the names of the arbitrarily detained and forcibly disappeared persons, she listened to the points made by the association’s representatives in regards to the detention centers themselves and the lack of measures taken to provide proper medical facilities, especially during these times of diseases outbreaks and another wave of COVID-19. 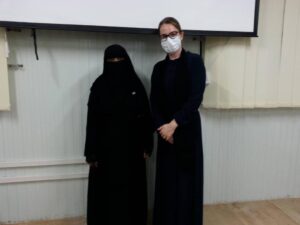 Later on, Mari Luis met up with Alhudayda’s team of Abductees’ Mothers Association in Mocha. They, in turn, explained the violations against the abductees at Alhudayda prisons, which included mistreatment, torture, deprivation of all rights.

After receiving a file that contained list of names of abductees and forcibly disappeared, as well as written and recorded statements of tortured abductees, she listened to the statements of some abductees’ families, who spoke of the violations against their abducted relatives carried out by either Houthi armed group or Joint Forces. They also spoke of the cases of abducting women by Houthi armed group, and the stories of the released ones.