Abductees’ Mothers Association in Aden made an urgent call to the new government, headed by Prime Minister, Ma’ien Abdulmalek, to prioritize the case of forcibly disappeared individuals in the government’s agenda in order to uncover the fate of 39 persons who had been abducted and forcibly disappeared by Security Belt in Aden for four years. In its rally this morning by Maasheeq Presidential Palace, the association stated that the fears and inquiries of abductees’ families were met with absolute silence from the competent authorities even after appointing the new government. 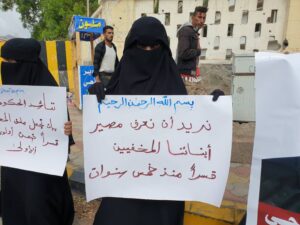 They have not been given any reassurance or information regarding the mechanism of uncovering and releasing their relatives, or holding the violators accountable for their actions. Thus, their fears and worries had multiplied. 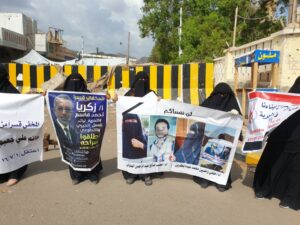 The rally statement stressed that as a new year started and the government arrived at the temporary capital, Aden, mothers rise our expectations to end their and their forcibly disappeared sons’ suffering, and that it was time for mothers’ hearts to stop fearing and for their reunions with their sons to be held.

The statement called upon human rights organizations, locally and internationally, to support the mothers and mount the necessary intensive pressure in the near future to uncover the fate of forcibly disappeared persons and help save their lives and reunite them with their families. 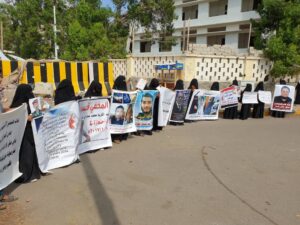