Abductees’ Mothers Association called to build fair peace and stop the war in its rally this morning in Marib, which was held in conjunction with International Women’s Day. 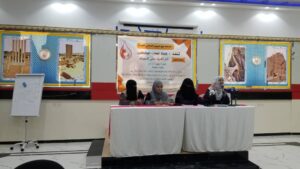 In the statement, the association declared that it had monitored 4 prisons in Marib, in which 550 men and 13 women are held, as well as 19 civilians and war prisoners, and they had all become in danger since the city was repeatedly targeted by ballistic missiles.

Additionally, the association had, previously, documented that 320 released abductees had been exiled to Marib, due to the prisoners’ swap deals, or left their hometowns fearing the danger of abduction again, and currently live there with their families.

The association’s rally was held at exceptional circumstances as the city was being targeted by ballistic missiles, which portrayed the strong will of Yemeni women and their efforts in peacebuilding.

The association called to celebrate International Women’s Day by abiding by its calls in order to end the war and take the needed actions to build permanent peace. 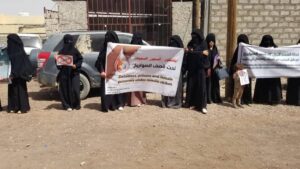 The statement called upon the international community, mainly the UN, its Special Envoy and peace-fostering countries, to fulfill its duties by protecting civilians and detainees.

The rally, itself, was held after a seminar held by the association, titled War and Its Impact on Women.

Association representative, Sabah Humaid, presented the association’s work paper which elaborated the violations against women, documented by the association, which included the abduction of 157 women by Houthi armed group. In addition, Humaid mentioned the threats, detention, and forced disappearance women face while traveling. 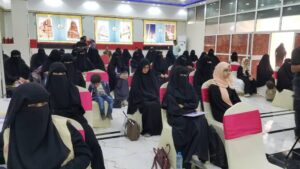 During the seminar, Head of Social Affairs and Labor Office, Abdulhakim Al-Qaisi, expressed the local authorities’ appreciation of the great role of women and their astonishing efforts in all fields, mainly humanitarian fields.

Radiya Al-Najjar, Head of Female Department in Ministry of Education, made a presentation, titled Social Impact of Wars on Women and Children, in which she showed different figures and statistics of refugees and the negative effects of displacement on women.

Dr. Afrah Taher, a psychiatrist, had a presentation on the effects of mental warfare on women.

She brought examples of women who had been mentally devastated by the war, abductions, displacement, or losing relatives.

The seminar was concluded by extending several recommendations including; fulfilling the local authorities’ duties towards war-affected women, implementing peace agreements, immediate ceasefire and peacebuilding, and effectively fighting the violations against women.