Abductees’ Mothers Association condemns the show trail of 36 abductees who were forcibly kidnapped, locked inside Political Security Prison, and subjected to severe torture with the aim of extracting confessions based on false accusations.

After a year of enforced disappearance and brutal torture, the alleged case of the abductees was referred to Criminal Court who, in turn, did not take the rightful legal actions. The case itself showed the tremendous amount of abductees’ rights violations in terms of forced hiding, arrest and search procedures, and terrorizing abductees’ families which all are humiliating and obviously violating constitution and international agreements. Consequently, the court should have taken a stand to those violations. 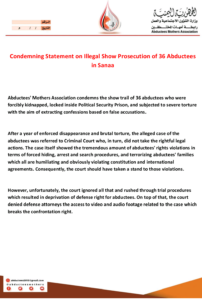 However, unfortunately, the court ignored all that and rushed through trial procedures which resulted in deprivation of defense right for abductees. On top of that, the court denied defense attorneys the access to video and audio footage related to the case which breaks the confrontation right.

Supreme Criminal Court went on with the law-breaking trail using groundless procedures such as assenting to display footage and photographs of forced confessions inside courtroom walls. In addition, the court approved the broadcast, through different media platforms, of a documentary film related to the case and based on those coerced confessions and false accusations, which shows that the influenced court had already had a prior conviction. 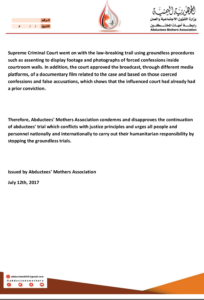 Therefore, Abductees’ Mothers Association condemns and disapproves the continuation of abductees’ trial which conflicts with justice principles and urges all people and personnel nationally and internationally to carry out their humanitarian responsibility by stopping the groundless trials.